For the current news around the Association, click on the button below to link to issues of the Association Newsletter, Track
Link to issues of Track
<
>
Vale
( short for the Latin phrase “ave atque vale” meaning Farewell or Goodbye and pronounced Va-ley)
​
1940 – 2020 (13 Feb 2020)    BRETEL. — David George

David passed away peacefully at Maffra and District Hospital Maffra on Feb. 13, 2020
Aged 79 Years.
Loved father of Daniel & partner Denise and Yvette (dec). Grandpa of Ryan.
Was in Charge till the end.

A Celebration of the Life of Mr David George Bretel will be held at Geoff Rossetti Memorial Chapel, 1390 Maffra Road Sale (next to Sale Cemetery) at 1:00 PM on FRIDAY (Feb. 21, 2020)
A Private Burial will take place after refreshments.
Funeral - Ivan Paul MAHER 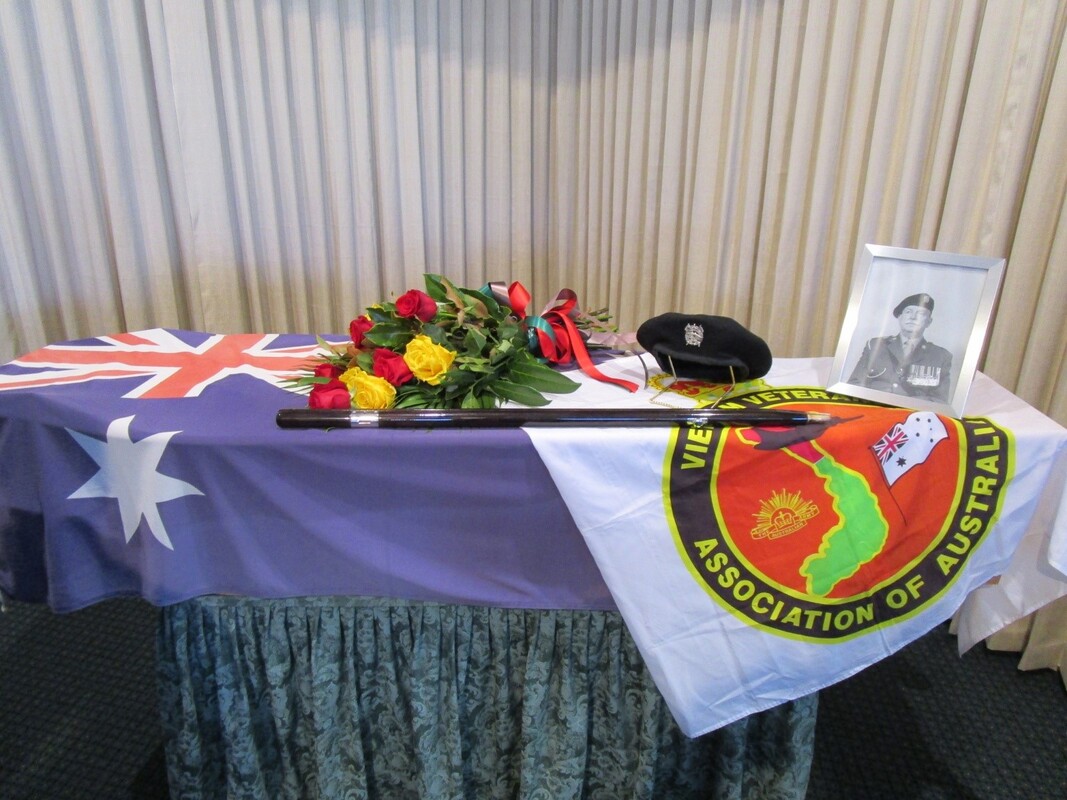 On Thursday 26 September, one of our finest soldiers was laid to rest. Attended by family, friends and a large number of members of his Black Hat ‘family;’ former WO1 Ivan Paul Maher was honoured and remembered at a moving funeral service conducted at the Funeral Parlour of Heritage Funerals. Boronia Road, Wantirna.
Click here to download the Service History of Ivan Paul Maher (courtesy Noel McLaughlin)
Vale - Charles Walsh
Charles Walsh was remembered at a service in Seymour in July 2019.  Following the service, his wife Alleyne was presented with the RAACA plaque which was to have been presented to Charles in recognition of his dedication and service over the many years of his RAACA membership. 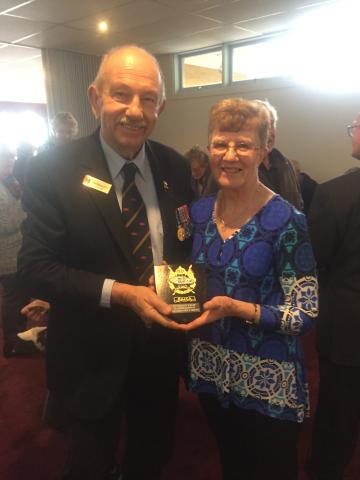 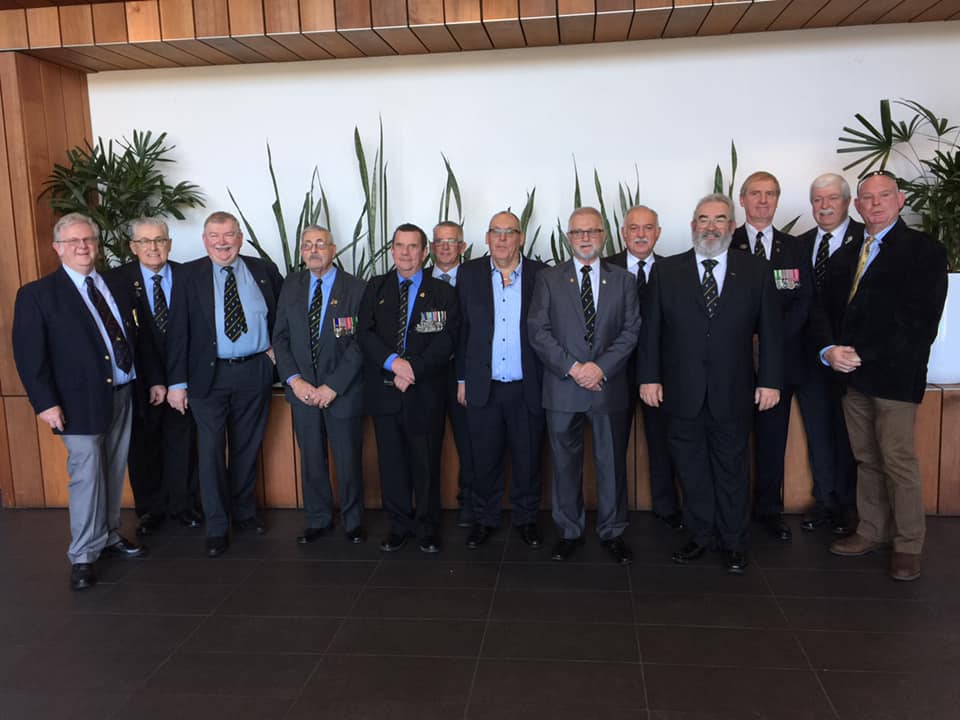 Vale – 25631 Lt Col John Williams
Born in 1931 in England, John Williams arrived in rural NSW with his family as a teenager. He joined the Citizen Military Forces, 6th NSW Mounted Rifles, in 1949 and then undertook the first regular officer training course at Portsea in 1952. As a 2nd Lieutenant in the Royal Australian Armoured Corps, 25631 John Williams was one of five officers attached to the British Army’s 1st Royal Tank Regiment in November 1952 to gain relevant experience during the Korean War.
John recalled, years after, that he arrived back at Puckapunyal in March 1953 having spent his time in Korea on Centurion tanks. This had also just become the new vehicle for Australia’s 1st Armoured Regiment. So, upon his return to Puckapunyal he found himself one of the few officers who already knew about this new equipment. A very busy time followed for this junior officer.
After a series of regimental postings, his later jobs included a staff posting at HQ in Port Moresby, Papua New Guinea, and as a student at Command and Staff College, Queenscliff.
John again deployed to a war zone in 1971, serving as a Major with the HQ Aust Forces Vietnam (HQAFV) in Saigon. His Republic of Vietnam awards included the Staff Service Medal 1st Class and the Armed Forces Honour Medal 1st Class.
He returned to Australia and by 1974 had left the Regular Army for family reasons. His civilian career subsequently saw him as a property developer and builder.
As a now available reservist, he attended the 1974 camp of 4th/19th Prince of Wales’s Light Horse Regiment in Victoria as a supernumerary. He was later promoted and appointed to command the Regiment from June 1975-1978.
These years saw large armoured reconnaissance exercises over vast distances in the Mallee desert scrub of north-west Victoria. They were followed by the times of government cutbacks, so John Williams turned to major ceremonial activities as a substitute, to boost morale and raise the public profile of the Regiment. The following year, we were back to the desert exercises, but that parade experience was again put to good use in the 1977 Queen’s Silver Jubilee military parade in Melbourne. The Regiment’s contribution was a full APC Troop of 16 x M113A1s.
Upon his (final) military retirement, John Williams continued to show a keen interest in the RAAC and particularly in 4/19 PWLH as a Trustee. Even this year, at the age of 86, he participated in a special Regimental Trustees tradition when he attended the Welcome Dinner for the incoming CO of 4/19 PWLH - LTCOL John Pearse. 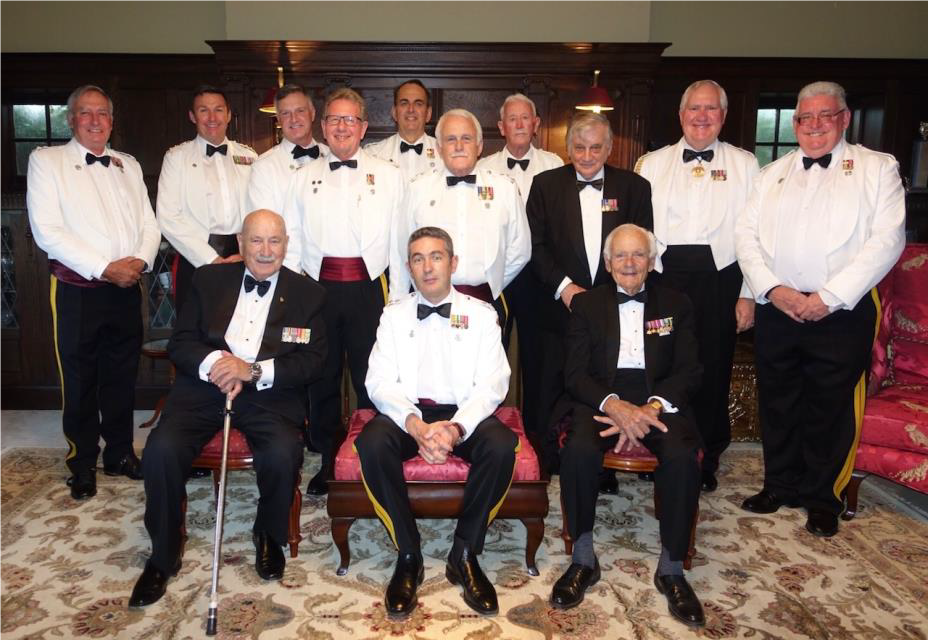 Daryl Pinner OAM
Following the memorial service for the 73rd birthday of the RAACA (Vic) which was held in the Sanctuary, we moved down into the Western Annex for the traditional sumptuous afternoon tea where a surprise awaited IPP Daryl Pinner, OAM and his wife Frances.
Daryl was presented with a Peter Wren Memorial Certificate of Merit and Frances a sheath of flowers. He was the final member of the former long serving executive committee to be formally recognised in the past three months. 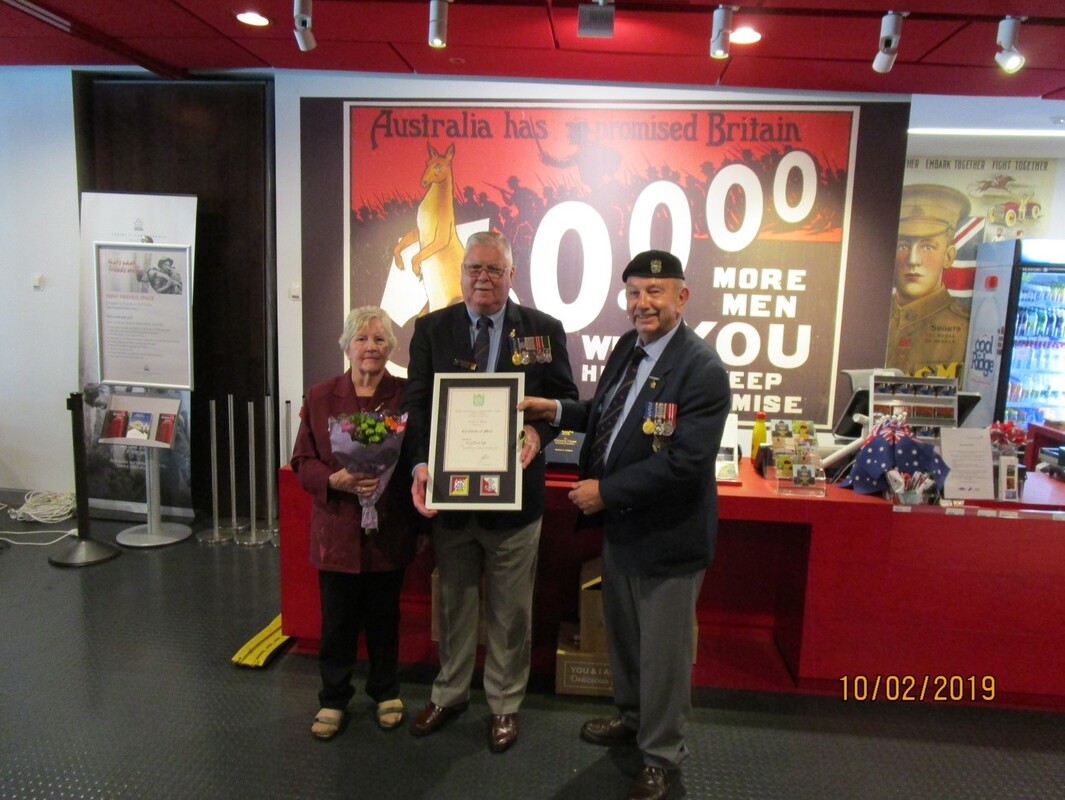 ​Photo above, Frances and Daryl Pinner with President Peter Branagan ​
Daryl Pinner, OAM joined the association in 1968 at a time when it was floundering and threatening to fold.
By the judicious use of his imposing size, great enthusiasm and organising ability, he was able to, with the assistance of several other like-minded individuals; breathe new life into the Victorian Branch. In 1977 he was elected to his first term as President and with only a couple of short breaks; served in this role until 2015.  His early service was recognised with the awarding of Honorary Life Membership at the Cambrai Dinner in 1984. On Australia Day 2003 he was awarded the Medal of the Order of Australia (OAM) for his service to veterans both in the RAACA and Legacy. Along with his wife Frances, he has given unstintingly of his time and energy to improve the lot of our veterans. A huge well done to you both.
Godfrey (Camel) Camenzuli
Former long serving Treasurer/Membership Officer Godfrey Camenzuli was deeply touched when the President surprised him at the kid’s Christmas party at the Diamond Valley Miniature Railway on Sunday, 16 December 2018 with the presentation of a Peter Wren Memorial Certificate of Merit. He served as Treasurer - Membership Officer from 1985-2002 and 2007-2015. In his comments the President stated that  ‘Camel’ epitomised the meaning of service and dedication to a cause and it was entirely appropriate to make the presentation in the presence of his family and many friends.
‘Camel’ had previously been honoured for his dedicated service with a presentation of Honorary Life Membership of the Association at the Cambrai Dinner in November, 1996. 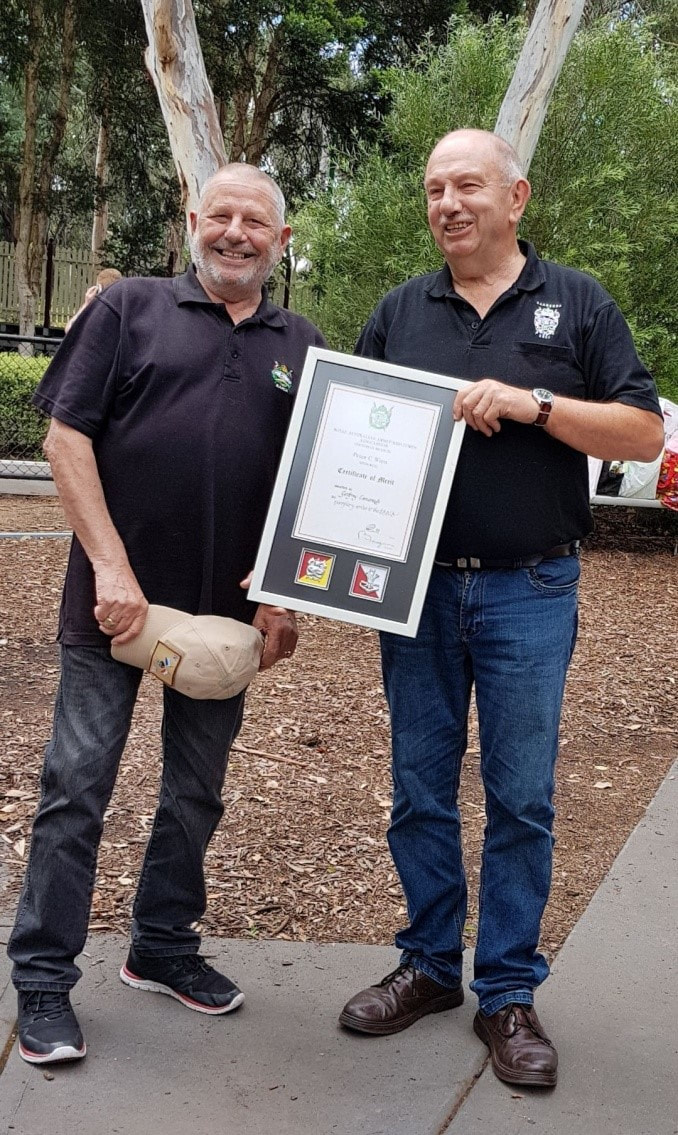 John Paterson
Former Secretary Honoured With Peter Wren Memorial Certificate of Merit
John Paterson, who coincidentally took over the role of acting Secretary in 1984 when the incumbent – Peter Wren was struck down with a fatal heart attack; has been awarded the RAACA Certificate of Merit named in honour of his predecessor. At the AGM in February 1985, John was formally appointed as Secretary: a post he held continuously until his retirement due to ill health at the AGM in February 2017.
In concert with fellow long serving executive members Daryl Pinner and Godfrey Camenzuli; John served some 32 years in the role that is the lynchpin of any organisation. John’s sterling efforts were also recognised at the Cambrai Dinner in November 1996 when he was awarded Honorary Life Membership of the Association by then Director of Armour - Colonel Gordon Jones, AM.
On Friday 23 November 2018, President Peter Branagan and committee members Ian Smith, Andrew Clark and Rod Westgarth visited ‘Patto’ and his wife Deidre at their new home in Craigieburn to make the presentation 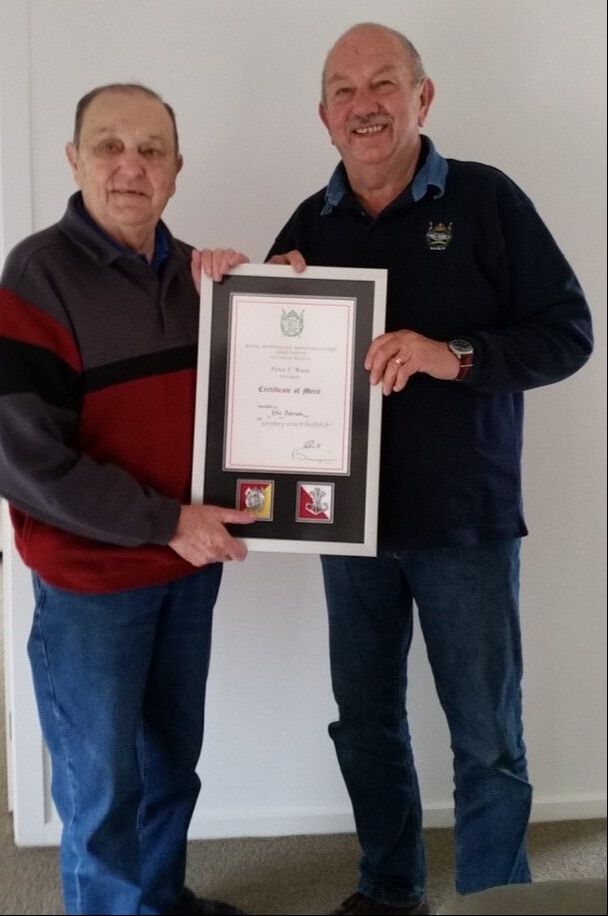 Joan Finlayson
A True Benefactor Honoured at Montmorency
On Saturday, 18 May 2019 at the Montmorency RSL; due recognition was given for over 30 years of generosity and philanthropy to the RAACA Victorian Branch and the Australian Army Tank Museum. The award of Honorary Life Membership of the RAACA was bestowed upon Mrs Joan Finlayson.

Joan and her late husband Arch, a veteran of the World War II 2/8th Armoured Regiment, have very generously supported the Association and the Army Tank Museum and in the early days Arch would spend time at the Museum exercising his carpentry skills. In March 2010, Joan established the Arch Finlayson Memorial Scholarship for 1st year apprentices in his memory. Six scholarships have now been awarded.​ 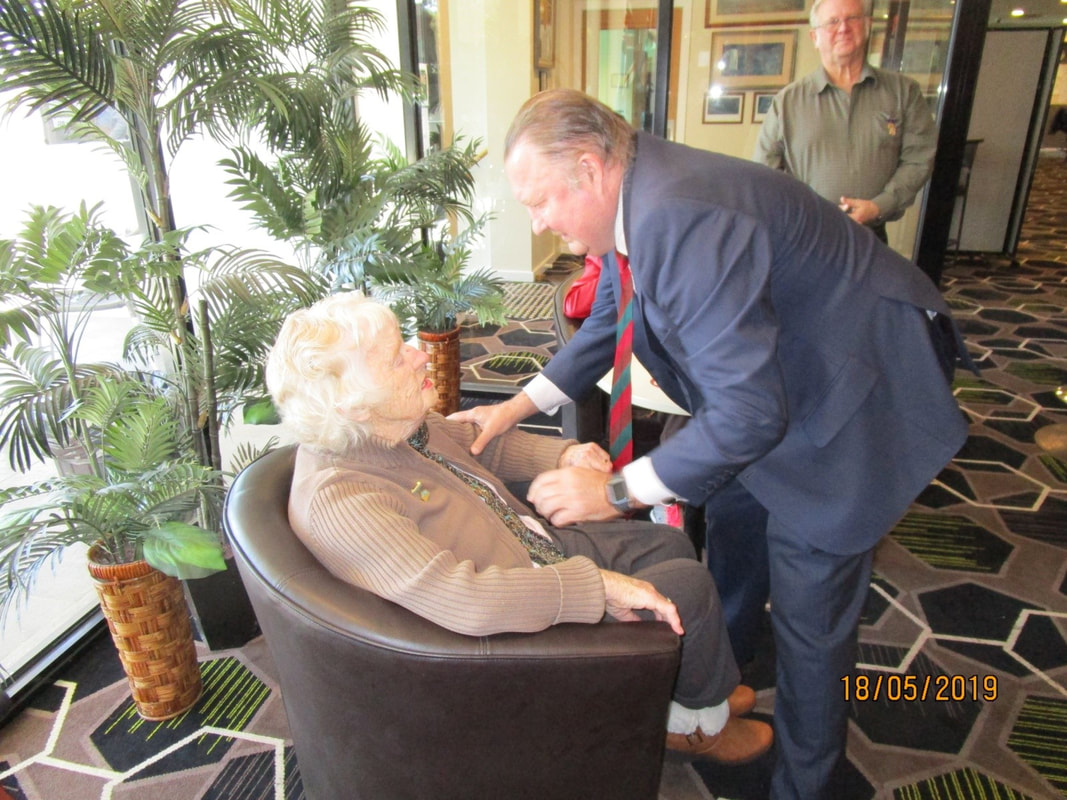 Patron Brigadier Ted Acutt had the honour of pinning a Honorary Life Member’s badge on Joan at Montmorency RSL on Sunday 18 May. Watching on is secretary Peter Axton.  President Peter Branagan recounted  the Finlayson family’s contribution to the RAACA whilst RAAC Historian Major John Baines (Retd) spoke passionately about their generous support to the Army Tank Museum.

Apologies were received from Rod and Sharon Westgarth who were in Adelaide for the birth of their first grand child. Heartiest congratulations to Lauren and Jimmy Peile on the safe arrival of a brand new Trooper – Tex Leo Peile was born on Sunday evening 19 May.
Also an apology were IPP Daryl Pinner, wife Frances and Graham’Diesel’ Perkins.
Honorary Life Membership - Recognising those who were awarded before
Click on the link below to open a roll of Honorary Life Memberships awarded since the foundation of the
RAACA (Victorian Branch)
Roll of Honorary Life Members